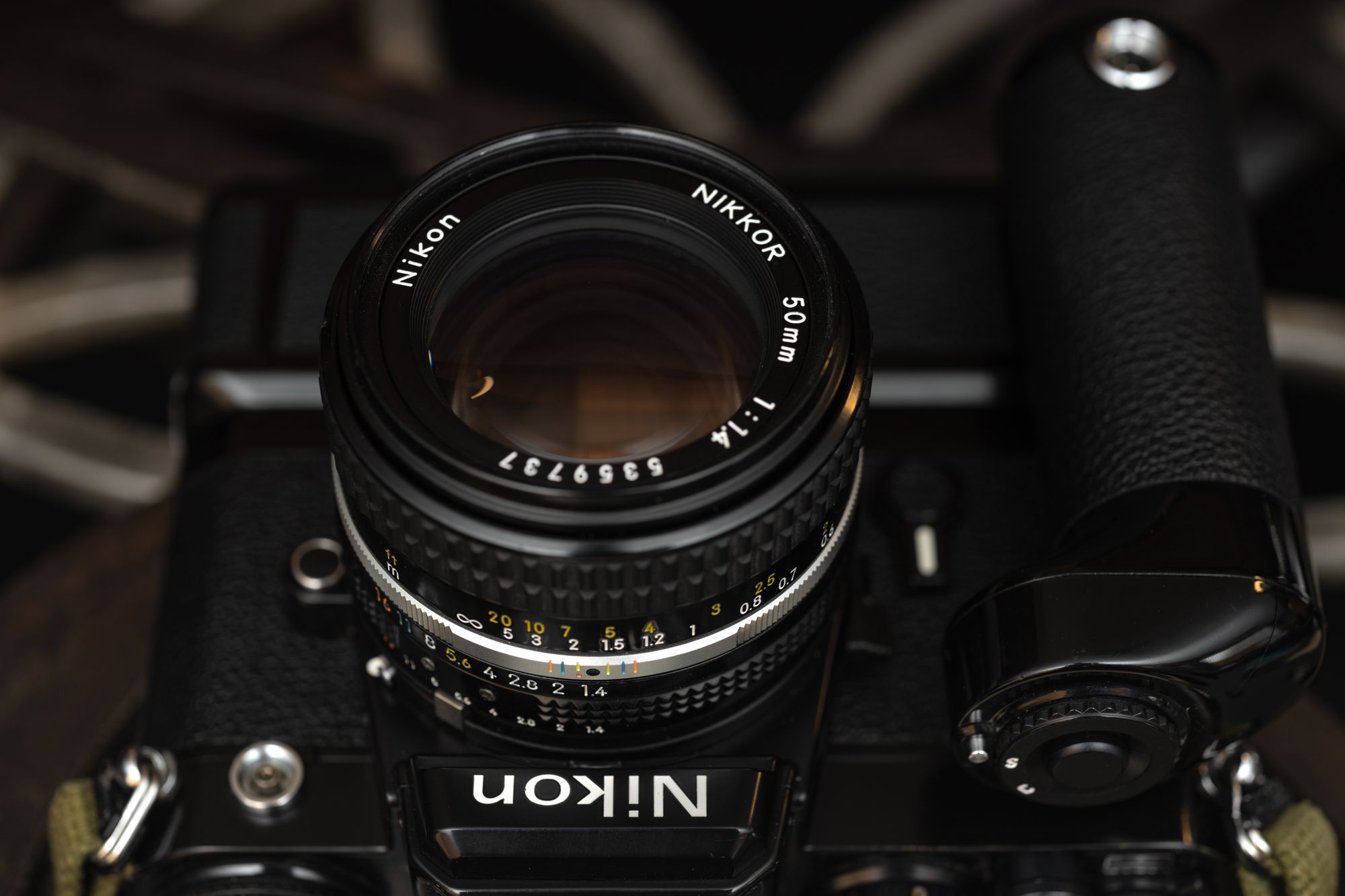 Back to the Basics: My Experiences With the Nikkor 50mm F/1.4 AI-s

When I got my Nikkor 50mm F/1.4 AI-s, I was so blown away by not only how it performed, but also by how it changed my view of my own photography, that I felt the need to write an article about all of it. I also wanted to include a small review of the lens, in case any0ne else has it on their radar and isn't sure whether to pull the trigger (TL;DR: do it).

Hunting for the Perfect Lenses

Over the past year and a half or so, I have had the incredible opportunity to use a wide variety of cameras and lenses, and my lens collection has grown considerably. For much of that time, my mindset centered around "the right tool for every job." I continued to try different lenses, varying from obscure, under appreciated gems like the Canon nFD 50mm F/3.5 macro, to some of the highest end portrait lenses available, like the AF-DC Nikkor 135mm F/2D and the AF Nikkor 85mm F/1.4D.

This experimentation has brought me not only a great deal of respect for the engineering that goes into these incredible pieces of work, but also caused me to fall into a bit of a gear chase. I wasn't always focused on creating with the lenses, rather, I was instead focused on getting the best image quality possible by getting the best lens possible. Now that sounds like a good thing, until you realize that is not how creating art works. Any painter can buy the most expensive paintbrush made with the finest bristles in the world, but they still have to make the painting, and only the best painters can create the best art-pieces. That is where I stood. With a collection of the best paintbrushes I could acquire, I spent time making straight lines, seeing how fine the strokes could get, and how well the paint was put to canvas, but when I was done, I had no art. At least, no art of meaning. Then I gave this little gem of a lens a shot.

My History With the Fifty

I shot this lens for about a year and a half and became very familiar with its attributes. It was a decently sharp lens, as 50 mm prime lenses are famous for being, vignetting was minimal, and it was a hardy little guy that survived a lot of abuse from me, even after its AF system died. But this lens had one major flaw, in my eyes. This lens glowed. Not the typical glow associated with spherical aberration (more on that in a bit), but glow around white highlights caused by color fringing. Now for most photographers, that is probably not even noticeable for 80% of their images, but I do a lot of product shooting, often with white text or little silver bits, and they all would just light up if I shot with the aperture too wide. And it turns out this was how all of Canon's fast fifty primes had been like ever since their FD mount for their film lenses, and Canon just never saw a reason to fix it until the RF 50mm F/1.2L. For normal photography, it wasn't a problem. For product photography, they expected you to buy a slower macro lens like the FD 50mm F/3.5 or the EF 50mm F/2.5, but what if I wanted speed without that weird glowing text? Well, then I was SoL. And that's where I stood for a long time. Until I got into new camera systems and I explored other lenses, I never went back the fast fifty, because all that glowing chromatic aberration just wasn't something I wanted in my images, and I had found I could make do with longer fast lenses, or slower F/2.8 primes. Until the Nikon 50mm F/1.2 AI-s.

After I finally settled on a lens system I wanted to grow with, the Nikon F system, I started to expand my lens collection. At this point, I still wanted the staple lens in every photographer's bag, the fast fifty, and decided to pick up a Nikkor 50mm F/1.2 AI-s. This lens was fun, very fun. For the day I had it. Mine ended up with its focus ring locking up and being unable to turn, so it got returned. Before that happened, all I was really able to get out of it were some test shots at speed and some generic "hey this is cool" shots. I shot this lens on my Sony A7R II, a camera I loved all the technical specs of, but just couldn't love the images, and I, to this day, could not tell you exactly why.

The lens was fun, and it was sharp, and at F/1.2 it had a glowing like effect due to spherical aberration, and it was free of the color fringing that plagued Canon fast fifities, so for all intents and purposes, it was great. But for whatever reason, I cannot remember, I never got another one.

So, time went on. I forgot about the fast fifty, I forgot about the lens I learned on, I forgot about Nikon's fifties, because I never really connected the lack of aberrations to the fact the lens was Nikon, I thought that was simply how the F/1.2 AI-s lens behaved. After a long while, I grew tired of all the lenses I had, and realized it was time to try the fundamentals one more time. And that was the best decision I have made in a very long time. I picked up a nearly mint example of the Nikkor 50mm F/1.4 AI-s for about $130. At that price, I don't expect much, even though I know vintage manual lenses throw punches well above their price point. I got the lens and by God, I was absolutely blown away.

The lens rendered simply beautiful images! They were sharp, they were contrasty, F/1.4 had a slight glow from spherical aberration but almost none of that nasty fringing I got from my EF 50mm, and the images simply looked good. And not only that, it felt amazing to use. The focus ring is perfectly resistant, the aperture ring is snappy and has lovely clicks, and everything on the lens is made of metal, and all the markings are engraved and then filled with paint. It's deceptively small. When you think of F/1.2 and F/1.4 50mm lenses, you think of compact, but you never think of them as compact as these old Nikon manual lenses were. This is a lens I can truly take anywhere, no matter how full my bag is. It's a lens I don't go anywhere without these days.

This lens changed how I shoot drastically. It's significantly smaller than my other sub F/2 lens, my AF Nikkor 85mm F/1.4D, which I've found is almost unusable in outside shooting without its hood, which is also huge! And the 50mm F/1.4 can be used with or without its hood, I simply elect to use it with the hood because it looks classier and keeps my fingers out of the way of the front element.

This is an interesting topic with this lens. While the bokeh is generally quite wonderful, it really can depend on the subject of the shot. For 90 or 95% of what you'll do, it's amazing. For the other 5 or 10%, which is when you have extremely bright highlights creating prominent bokeh balls at F/1.4, you can get green rims on the bokeh balls. It's a bit odd, but isn't something you will encounter often, nor is it distracting in most of the instances you will see it. I took a few shots of this tree at F/1.4, F/2, and F/2.8, to show how the bokeh behaves at each aperture with this extremely complex and busy background. All of these are shot on the EOS R at ISO 200.

In my eyes, the bokeh of this lens is wonderful. And after doing a portrait shoot with it, it renders quite well. Not to the level of my 85mm F/1.4, but still quite good.

This is a sharp lens, plain and simple. With the standards I hold my equipment to, that's quite saying something, and there's a good reason why a few of these AI-s lenses, including this 50mm F/1.4, are still being made and sold brand new by Nikon. This 50mm F/1.4 now costs $470 new. At F/1.4, you lose some sharpness to the glow of spherical aberration, at F/2 it's mostly gone away, and by F/2.8, it's sharp across every part of the frame and is perfectly contrasty, with virtually no spherical aberration to speak of. I do all my product shooting at F/4 or F/5.6, and any shooting outside at whatever F stop matches the style of shot I'm going for, since it's perfectly usable at all apertures. Below are shots of the lens at F/1.4, F/2, F?2.8, F/4, and F/5.6. These images are unaltered RAWs processed through Lightroom, so no sharpening or dehaze or other edits were applied. All shot at ISO 200 on the EOS R, except the F/5.6 example which required me to shoot at ISO 400 to get the shutter speeds fast enough for a sharp image. The focus is on the logs, though the unevenness of the logs and the DoF at F/1.4 and F/2 means many of them are inevitably out of focus.

My Thoughts and Conclusion

The Nikkor 50mm F/1.4 AI-s is an absolutely amazing lens through and through. It's built like a tank, it feels good to use, it makes good images, and most importantly of all, it's fun to shoot with. It has done a lot for me in the way of bringing me back to what I love about photography, getting out there and shooting and creating something beautiful. Having a versatile all around lens that's this good allows me to get shots and go places I never thought possible. For too long I held such a negative opinion of the fast fifty, for my purposes, at least, all thanks to the Canon EF lenses I had seen when shooting with that T2i. This lens opened my eyes up to what a good 50mm lens can be, and I am never getting rid of it. 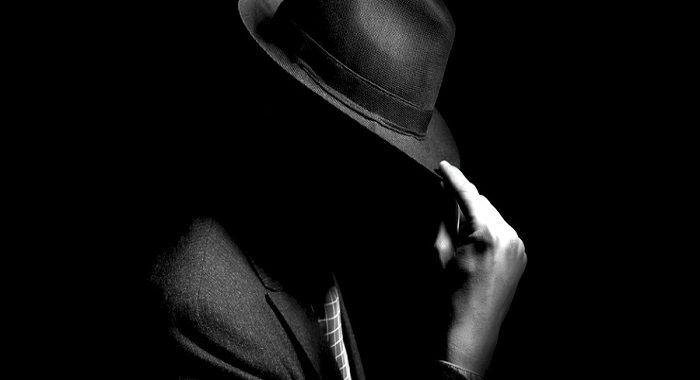 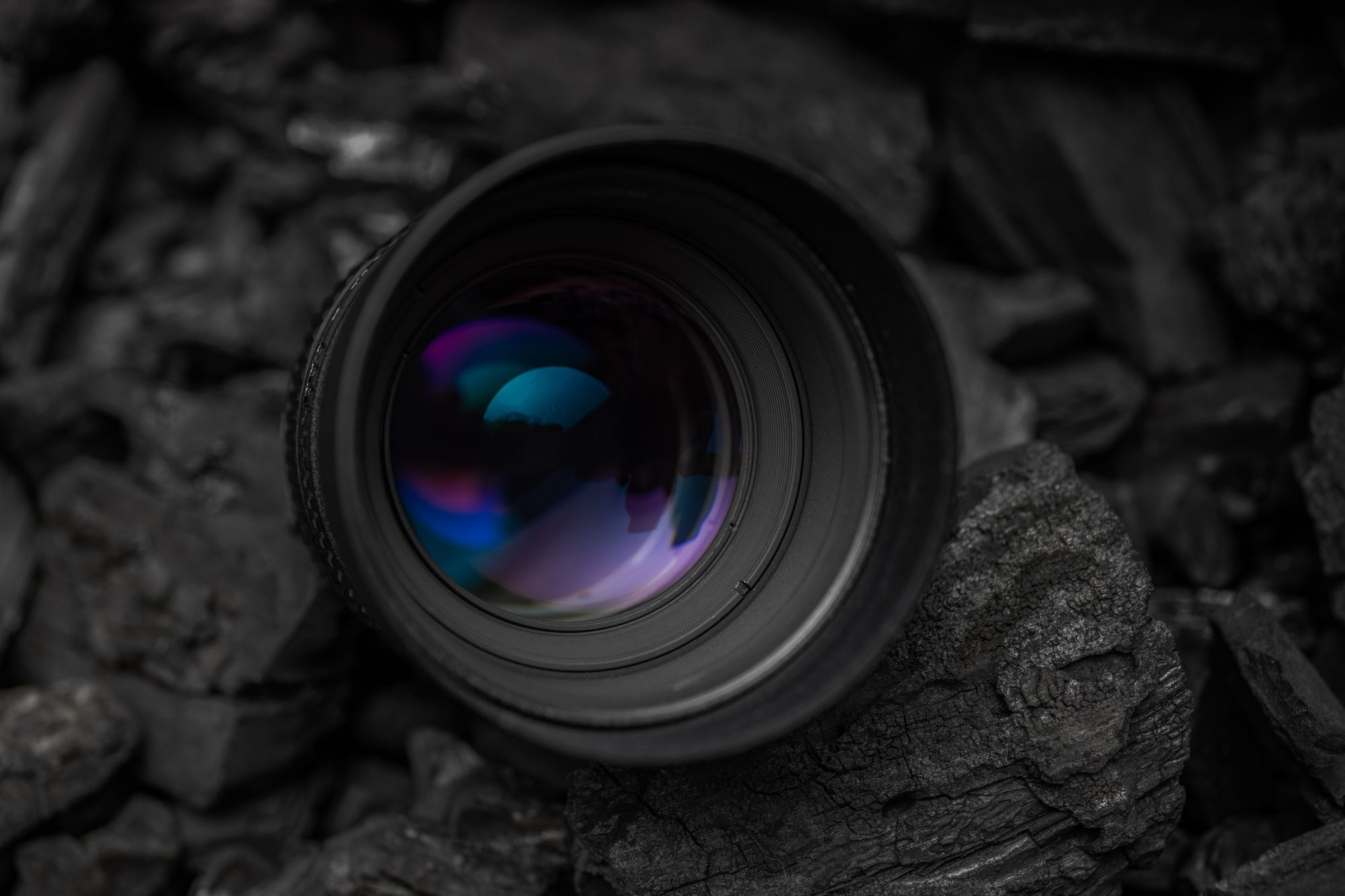 Saving a Vision: The Power of Smart Edits 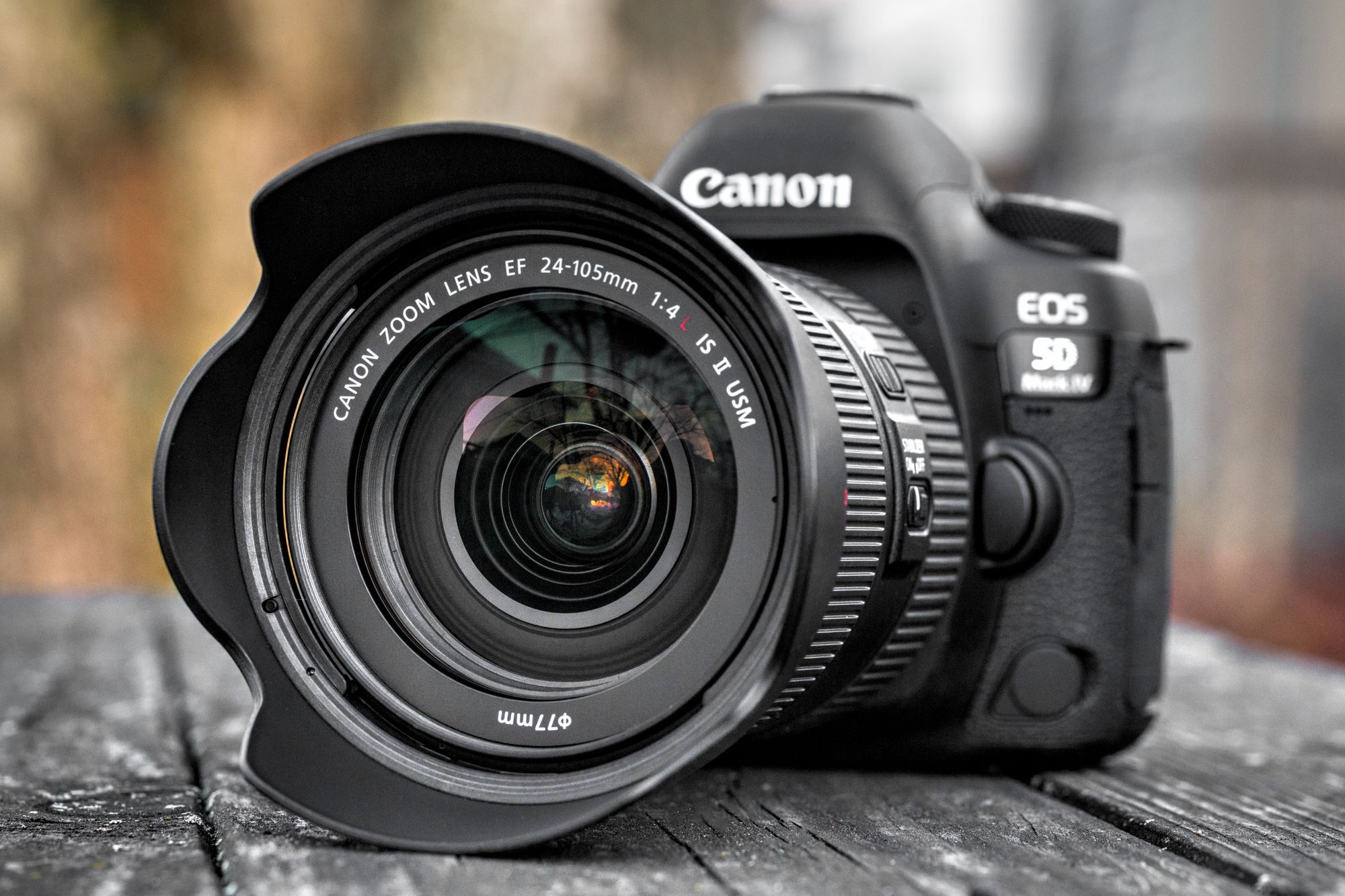